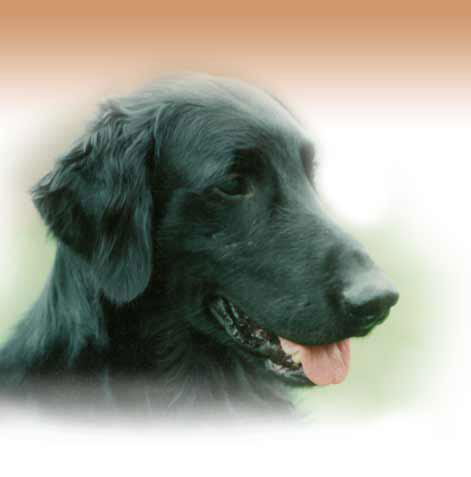 My husband and I bought our first flatcoated Retriever (Ebony Reliance) in 1966. She was the daughter of  Colin Wells'  Ch. Waveman.  After a few years we decided she was such an assett to our family that, after searching long and hard and getting in touch with lots of Flatcoat people, we eventually bred her to Pegasus of Luda, who was BOB at Crufts that year (no CC's). We kept Nimrod Reliance, a bitch, and started showing her a little. She showed and settled into the household so well that we decided to breed Ebony again. To this end a working/show dog Heronsflight Tercel, himself a descendant of Teal of Hawks Nest, was chosen.

So began my friendship with Joan Mason, and the Heronsflight prefix. Torwood Trader, (we had by then aquired the Torwood prefix), turned out to be not only the devoted companion to our daughter, but a natural working dog and consistant winning show dog, gaining CC's and FT awards, as well as living to the grand old age of 14 years, then when Heronsflight Puff, the last of Stanley O'Neils famous Pewcroft line whom Joan had rescued when Stanley died, became available she joined us.  From these dogs descend the Torwood dogs we know today who form the foundation of many kennels both abroad and at home.

Torwood Peerless is still producing lovely dual purpose puppies in the USA, (through sperm frozen over 25 years ago) for  Valerie Bernhardt and Helen Szostak. A brother, Torwood Puzzle, went to Per Iveson in Norway to be followed many years later by Coalport Countryman, from one of my Heronsflight sires,  who proved even more successful in all respects in the hands of his young handler. Other notable pups have gone to Holland, Canada, Switzerland, New Zealand, Israel and Bermuda, to help with breeding programs as well as to take their places as family pets, doing their bit in keeping the looks, working ability and temperament of the Flatcoat in the public eye throughout the world.

Torwood has produced some stunning multipurpose bitches (Torwood Poppet, Torwood Dazzler, Torwood Delinquent and Torwood Pyjama Party to name but a few), but it is the male lines of descent that have carried on and are predominent in the kennel today. (I love my boys).

The same two lines, ie. that of Ladyleys Black Magic At Torwood and his father Hugo My Boy At Torwood, (both at present at stud in the kennels) out of  Hillas Eagle for Torwood, through Dark Delight Henry Boy of Torwood, Prince Henry of Hasweth, Torwood Trader, Heronsflight Tercel and Teal of Hawk's Nest along with Arristrottle Athos At Torwood (Still at stud) who goes back to Indigo Jim At Lathkill, Hasweth Inigo Jones, Hasweth Jack The Lad, Lathkill Lad, to Ch Heronsflight  Pans Promise  himself line bred through his mother to the last of the Pewcroft bitches vis heronsflight Puff.. The Great Pretender at Torwood son of both Heronsflight Moss's Design on Hasweth and Heronsflight Charm of Falconcliffe,links both these males for superb line breeding. We hope soon to bring in a line from one of my favorite males (Croftgun Midnight Fizz At Torwood) and so add a thrird line of descent from the old dogs of the past who were such a strong foundation for the breed.