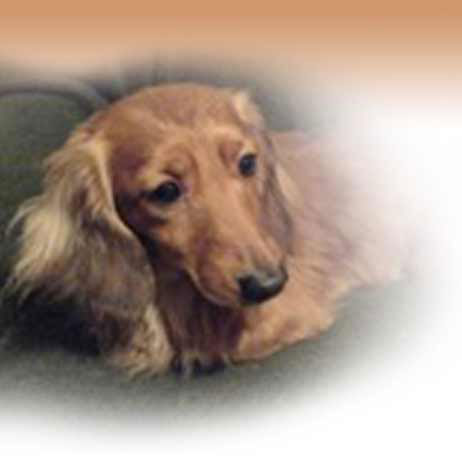 Soon after settling down to family life with our Flatcoats, it was deemed necessary to add a smaller dog to the household. After long and indepth consideration of all aspects of our family, a Miniature Longhaired Dachshund was thought to be the ideal dog and in 1969 along with the 'Torwood' affix came Vicki (Vicereine from Torwood). She became the foundation bitch for the female line of descent of the 'hound pack' we have today. She epitomised the breeds temperament, longevity and was physically and mentally sound oozing character being easy to train and such fun to live with.

As re-iterated previously, temperament was, and is, of primary importance closely followed by health and breed type. Breeding in the beginning was only to keep our pack up to 2/3 hounds as housedogs and companions. Studs were carefully chosen for personality and health, so pups did not have any temperament or health issues. In fact when DNA testing for PRA came in we were thrilled to find most of the dogs came back clear.  Vicky was a beautiful red, but soon silver and chocolate dapples as well as the chocolate and black and tan colours followed, and became very much loved and indeed sort after. Indeed Toffee Dapple from Tanska bred by me held the record for CC's for many years.

We have in the past few years increased the hound pack and they are the scource of endless hours of amusement, they have introduced me to so many new friends both here and abroad that I cannot imagine life without their little arristocratic bodies looking down their noses at what mischief they can get into next. Slightly hesitant singularly, in a group they are a force to be reckoned with as they don't know their legs are only 3 inches long, and hearts, as well as voices are as big as elephants.